Shima Sakon (real name Shima Kiyooki) was a general in the service of Ishida Mitsunari for military strategy. He proved a wise counsellor to Mitsunari, able to temper his lord's idealism with more realistic advice. Born to a powerful family in Yamato province, he served the Tsutsui clan in its struggle against Matsunaga Hisahide and his allies until he was cast out and became a ronin after reomstrating too frankly with his lord. Ishida Mitsunari, then leader in the Toyotomi clan's service, recognised Sakon's genius. He managed to recruit Sakon in exchange for half of his domain in Sawayama, and people used to say that Mitsunari had two things that he didn't deserve: Sawayama Castle and Shima Sakon.

Sakon's bravery was widely known and he had turned down many offers of employment from other daimyo before Mitsunari's. He finally accept Mitsunari's because he was so deeply moved by the startling and unprecedented offer of half of Mitsunari's own land in exchange for Sakon's service. Toyotomi Hideyoshi was also shocked and delighted by Mitsunari's actions, and personally reminded Sakon to serve Mitsunari faithfully.

Although Sakon was in Mitsunari's service, Mitsunari saw him as more of a much older brother. Sakon had a certain humanity and trustworthiness that Mitsunari lacked, and Mitsunari placed great importance on his opinions. Sakon, for his part, sometimes said things to Mitsunari that could be taken as sarcastic or rude, but never broke his vows of loyalty. Instead, he exerted himself to the utmost in support of his lord's success.

Unlock: To unlock, complete the mission The Demon's Daughter.

Although Sakon was said to have been brutally slain at the Battle of Sekigahara, his remains were never found. Persistent sightings of him in Kyoto after the battle led some to conclude that he had in fact escaped death at Sekigahara and returned to the capital.

Unlock: To unlock, complete the mission Raid on the Hirano River.

He is fought as a boss in the Sekigahara main mission. 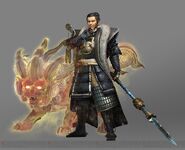 Retrieved from "https://nioh.fandom.com/wiki/Shima_Sakon?oldid=11982"
Community content is available under CC-BY-SA unless otherwise noted.