Karasu Tengu, giant Tengu with wings like a crow's, have been known to humans since ancient times. They have keen eyesight and hard beaks and fly about as they please, controlling the wind. They have no trouble finding purchase even on sheer cliff faces and use their control of the winds to attack when provoked, making them a troublesome foe.

Tengu are said to be strange echoes of Garuda, Buddhist guardian deity and slayer of serpents and dragons. Reportedly, in some areas they coexist with humans. The Karasu Tengu on Mount Kurama in Kyoto's north are credited with teaching the young Minamoto no Yoshitsune swordsmanship.

While this Yokai can be slowed down with Lightning Shots and Sloth Talisman on lower difficulties, this stops working well once you reach higher difficulties. In general, onmyo magic is not that effective against Karasu Tengu.

Ninjutsu however, works well - even on the highest difficulties. Makibishi slow them down and are easily hit, due to their propensity to close the distance and their size. Blinding Shells will make it so they missdirect their attacks and expose their back for increased damage. Sometimes they even get stuck in a loop when hit with blinding shells.

Cannons are also quite effective to damage and more importantly deplete their Ki before engaging in melee. Hitting a Cannon shot will stagger them briefly, and take away about 30% of their Ki. Since they are so big, and relatively slow when approaching, they can easily be hit 3-4 times from afar before they reach you. By the time they get to you, they are already out of Ki, and can be stunlocked to death. If you choose to deal with them in that fashion, bringing Shadowround Talismans is advised in areas with many Karasu Tengu's like Mount Ibuki. 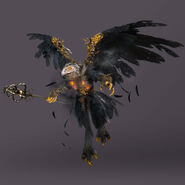 Retrieved from "https://nioh.fandom.com/wiki/Karasu_Tengu?oldid=12817"
Community content is available under CC-BY-SA unless otherwise noted.