Ii Naomasa was a general under Tokugawa Ieyasu, known for being as versed in the finer arts as the arts of war. He was counted among the Four Celestial Kings whose contributions to the Tokugawa clan were most spectacular. Naomasa entered Ieyasu's service as a page at the Battle of Nagashino, which triggered the demise of the Takeda clan. Despite his gentle demeanour, youthful good looks, his body was covered in countless battle scars, revealing the intensity of his efforts on the battlefield.

Naomasa hired a unit of Takeda retainers who were feared for their blood-red armour and reorganised them as "Ii's Reds". Naomasa led them personally. The Reds proved their mettle at battles across Japan, with Naomasa himself wearing a horned helmet and bringing such ferosity to every confrontation that he became known as the Red Oni.

When Naomasa was two, his father was suspected of plotting against the Imagawa clan and executed. It was Ii Naotora who took in and raised Naomasa after that. Naotora was a crafty woman and a master negotiator who rescued the Ii clan from its precarious situation and earned the sincere trust of her retainers. After her death, Naomasa inherited her Guardian Spirit, a Fire Tiger.

Unlock: To unlock, complete the mission [[[The Red Oni of Ii]] 3 times.

Naomasa is known for his good looks and considerate nature as well as his bravery in battle. When Toyotomi Hideyoshi's mother Omandokoro was sent to the Tokugawa clan as a hostage before Ieyasu accepted a position under Hideyoshi, Naomasa treated her with such courtesy that she was quite taken with him. It is said that when Omandokoro returned to the Toyotomi clan, she begged for him to be chosen as her bodyguard. 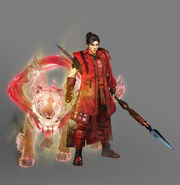 Retrieved from "https://nioh.fandom.com/wiki/Ii_Naomasa?oldid=11994"
Community content is available under CC-BY-SA unless otherwise noted.