The Giant Toad is, as its name implies, a Yokai in the form of an enormous toad. This one is even larger than a human being, capable of standing on two legs and even wielding a spear. Legends say that toads, which are long lived, are particularly capable of attaining consciousness and turning Yokai, but there are other theories as well.

This particular Yokai's original form was Hattori Hanzo's father, the first Hanzo to bear that title. Feared as Oni Hanzo for his ability to lead the Iga clan, he forced those who would succeed him to undergo harsh training. It seems this devotion to the future of his clan bound itself to this world, and transformed into the form of a Giant Toad to continue training his successors.

In addition to excelling at leaping attacks, its long tongue can punch its pipe outward for long range hits. It can also use the pipie's smoke to conjure the Yokai Realm in order to toy with its enemies. Only a truly powerful warrior stands a chance at beating this monster amphibian.

Found at the end of The Iga Escape mission, the 9th main mission in the Tokai region.

Also fought as a boss in the The Giant Frog Brawl sub mission in the Tokai region.

"So you broke their barrier to get through Iga. Impressive. But getting past me is another matter!" 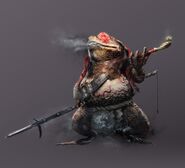 Retrieved from "https://nioh.fandom.com/wiki/Giant_Toad?oldid=11960"
Community content is available under CC-BY-SA unless otherwise noted.